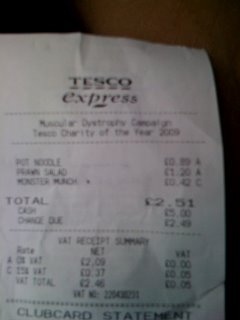 The two certainties in life are death and taxes. The UK vat rules say that some foods are vat exempt and others luxury goods are charge at 15%. For HM Revenue & Customs (HMRC) details can be found here

The most famous case in law was that of
HM Revenue & Customs v Mc Vities. The manufacturers of Jaffa Cakes, McVities classified them as cakes, and were taken to a court by Customs and Excise, who argued that they were in fact chocolate covered biscuits, and so liable for VAT.

McVities defended their case by making a very large Jaffa Cake in order to demonstrate that they really were just mini cakes. They also argued that biscuits go soft when left exposed to the air for long periods, and cakes go hard and since Jaffa Cakes go hard when left out, they were in fact cakes. McVities won their case, and VAT is not charged on Jaffa Cakes.

So it was a pleasant surprise today to see that from my receipt from Tesco Metro that Monster Munch (orginal pickled onion) are a luxury good and charged at 15% and eaten by the decadent and that Pot Noddles (Spicy curry) are essential food stuff and charged at 0%. It's a funny old world.
Posted by Unknown at 18:06 No comments: 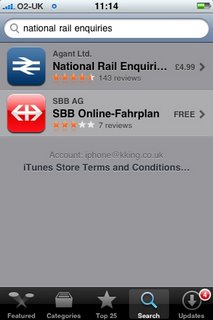 As I've mention previously myrail lite was closing down on 31st March . So I looked at the new app from National Rail Enquires and it £4.99 ouch. So I looked at other countries and found the SBB one is free. Is this another sign of rip off Britain or a sign of the future were we'll be paying a lot more for day to day infomation. 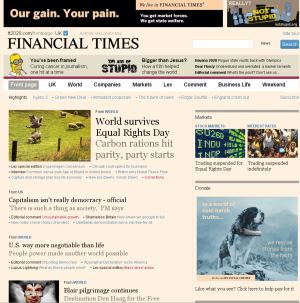 Reclaim the Streets have produced a spoof of the Financial Times for the year 2020.

Note: server was a bit slow when i looked as it took a while to load the page up.
Posted by Unknown at 15:29 No comments:

Well I think facebook has served its use and now is getting more and more filled with Spam. Therefore I've taken the decision to delete my facebook account and withdraw all my content from their service and not a moment too soon given the news report below which says 'Government plans to track the correspondence of millions on social networking sites have been met with fierce criticism'

The private correspondence of millions of people who use social networking sites could be tracked and saved on a “big brother” database, under new plans being drawn up by the UK government.

Ministers revealed yesterday that they were considering policing messages sent via sites such as MySpace and Facebook, alongside plans to store information about every phone call, e-mail and internet visit made by everyone in the United Kingdom.

My Rail was one of the best app's for the Iphone from Kizoom. It gave you the train time and from what platform the trains were running and updates if the service was delayed etc. This app has been an part of my life and in daily use for a long time. Its even told me the correct information when the announcements they make at stations are hard to believe.

You can get a full run down on what the app did here http://iphoneapplicationlist.com/2008/12/22/myrail-lite/ as I've said above I've been using this app for a long time and it was sad to see this appear on Twitter.

MyRail: We’re sorry to report that our license to distribute real-time train information from National Rail Enquiries is not being renewed.

MyRail: We regret that this service will have to be discontinued as of 31 March 2009. Thanks for all your interest and support

---
I think National Rail are missing a trick here unless they come up with an app which is as simple and easy to use as MyRail then I think its going to be a great part missing from my life and it won't make me travel by train anymore as I will not have upto moment information. Their Journey Planner is good but it shows too much you need something that is clean and elegant like MyRail was.

Update: There is a great article here by Rory Cellan-Jones http://www.bbc.co.uk/blogs/technology/2009/03/who_owns_train_times_or_th.html

"I'd received a press release promoting another train time iPhone application from - guess who - National Rail Enquiries. At the time I'd asked the press officer how the app compared to MyRail Lite - and been promised that it was far superior.

So last night I installed it and tried it out - and it was indeed very good, enabling you not just to check departure times but to plan a whole journey. But there's one catch - it costs £4.99, whereas MyRail Lite was free."

£4.99 bloody hell, how can they justify making the information on when train are running or delayed so expensive. I think I'll be giving that one a miss
Posted by Unknown at 12:05 No comments:

Daily Mail Demo- Tuesday the 24th 12-1pm, outside Northcliffe House, 2 Derry St, Near High St Ken tube station. The owner of the Daily Mail Viscount Rothermere is a non dom , so dodges tax in this country and it appears is domiciled in France for tax purposes. SO the owner of the Daily Mail is a tax dodging French man, the demo calls on the writers of the Mail to do their duty and stick it to Viscount Rothermere as sponging foreigner!

The Daily Mail is owned via a series of trusts , involving Bermuda another offshore tax haven... so Richard Littlejohn can get stuck into the paper too!

What is a "non-dom" and what is the Government doing to them?

British citizens with interests abroad can register for "non-domiciled" status, meaning they do not pay tax on earnings made outside the United Kingdom. In an effort to raise money to plug holes in public finances, the Treasury plans to make them pay up to £1 billion every year. Under plans due to take effect in April, anyone who has claimed non-dom status for seven of the past 10 years will have to pay an annual fee of £30,000.

On Sunday morning after brunch in Crouch End, we stumbled across a sign for The Capital Ring, having not heard about this place before we investigated a signpost and found that it is a surprisingly green route that encircles London within a radius should be 7-16km (4-10miles) of Charing Cross. Its total distance is 125km or 78 miles, it threads together parks and open spaces, mostly following pleasant residential roads in between. or so the website http://www.tfl.gov.uk/gettingaround/walking/localroutes/1160.aspx says, its a walking and cycling route all around Londo.

The 15 sections summarised below. What seems to be good is that no matter where you walk to you can get back on the tube or bus and get back home.

My plan is to cycle the whole ring some time in the summer. Below is a map of the areas of London that the ring crosses.

More information on walking in London

I'm often asked what was Newcastle upon Tyne called before it had a
new castle in the city. Often its quoted that it was called Gotham O'
Tyne below is a text with this quoted in. I'm going to find some
other sources as I know it's in a 12th Century poem as well. But Gotham seems to be the slang name for Newcastle

Full text of "A glossary of North country words, in use. From an original manuscript, in the library of John George Lambton, Esq., M. P., with conside 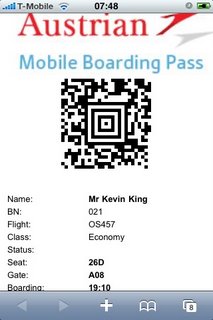 Well it was interesting this morning web marcus asked if I wanted my
ticket texted to me. They txt you a link ad you can download or have
your ticket ready for the gate. Having it ready at security and
passport control didn't seem to be a problem. Then one swipe over the
scanner as our at the gate and your on the plane nothing to lose on
use as a book mark mind you.
Another first for the geordie monkey and he likes it. Top banana!
Posted by Unknown at 21:37 No comments: 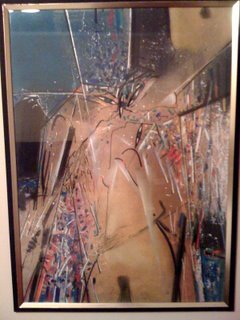 Darwin getting in on the Comic Relief fun 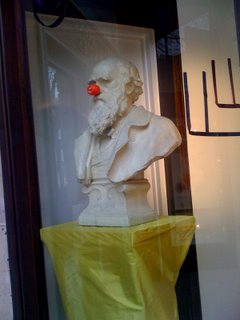 Well yesterday I got a chance to update all my photos to Flickr, this is one of my favs of Castlerigg Stone Circle 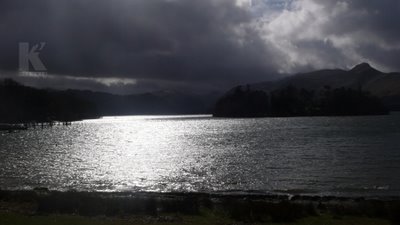 I forgot how beautiful the Lake District can be! This is just a sample of whats to come from my trip away. Once I'm done with a bit of photo editing i'll publish a full trip report and the pictures.
Posted by Unknown at 18:42 No comments:

> Yes it is true... there is another media event or as the police
> insist on calling them 'demos' at New Scotland Yard... on the 17th of
> March to find out how much of the police you can photo before it
> becomes illegal... starting with the shoes.
>
>

Well I'm signing off the grid

Bye bye iphone, see ya ywitter look after facebook for me see you soon k
Posted by Unknown at 07:14 1 comment:

Moonlight for Linux has make it to V1.0. Congrats Novell

Moonlight is an open source implementation of Microsoft Silverlight for Unix based operating systems. Hopefully this will mean have a Linux box at NAB this year running the ContentAgent interface.

We strongly recommend the use of Firefox 3 as it supports Windowless operation, a common feature used by Silverlight applications.

Preparing to go off the the grid.

Off the Grid, phrase slang

The term off the grid or off-grid refers to living in a self-sufficient manner without reliance on one or more public utilities.

In my case its all about communications technology leaving all the moblie cell phone and data connectivity behind and living for awhile without facebook, twitter not blogging every part of my life and just for awhile enjoying the sense of isolation. This is were the fun is as I have extreme techno-joy I love my devices and gadgets and wonder how I'd ever run my life without them. I've never complete left the grid in a long time and I wonder how i will feel being unconnected by my virtual strings to the web. So from this Friday for a short while the sound you will here is the tone of 400Hz in a continous cadence. Lets hope I don't like too much and decide I want to stay there.
Posted by Unknown at 14:23 No comments:

Labels: holidays, mobile, off the grid 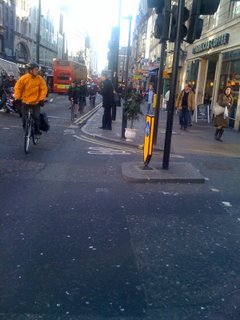 Nothing is strange on a monday mornimg. Plant waiting at the crossing on Oxford Street London
Posted by Unknown at 09:04 No comments: