Geordie armed with a M16

Well my foot and ankle seem to be getting better slowly, for a grim day by day photo account you can click on this link http://www.flickr.com/photos/akira_kev/sets/72157623219782738/

In other news at the weekend  I was in Amsterdam for a short visit, it snowed which made Amsterdam's cobbled streets very interesting with my ankle. The picture below was taken as crossed one of the canal in the southern ring. more shots http://www.flickr.com/photos/akira_kev/sets/72157603005875252/ But the fun had to end at some point so I had to get up 5.30am to get a flight back to the London Gatwick. On the trip back I was able to take this lovely shot the clouds at 13,000 feet just over the East coast of the UK. have you had an accident that wasn't your fault!

Well no not really, it was completely my fault! I should have looked at what I was doing a been sensible about it. So ambluance chasing lawyers you can stop calling now!.

I've ripped my ligaments in my ankle, which hurts a lot but so what, no dancing this weekend but I'll live. At least they didn't have to operarate. The shot reminds me of how lovely and timeless about London is, she may be a hard mistress but she's wonderful to me.
Posted by Unknown at 10:37 No comments:

On it's cold in London 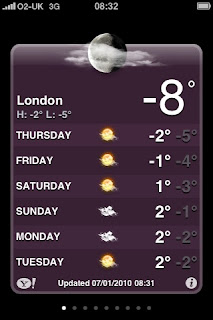