Got to have a bit of fun in life

All I ask is the chance to prove that money can't make me happy.

Spike Milligan
Every since I was a child I've loved comics, but over the years its not been going to the comic store and buying comics or anthologies. I've been mainly looking at comics on the web. But as with music the access to the tools to make something doesn't mean its good and it harder and harder to cut through the chaff to find the wheat.

Some great examples of web comics are out there and made a name for themselves Nick Seluk series http://theawkwardyeti.com/, Girl and Monkey and of course The Oatmeal  by Matthew Inman. But its always been a struggle to find new comics and remember where you found them, and as every supporting these creative people who spend so much of their time making wonderful work. I've bought books and plushies when they come out of the characters in the past.

So I was happy when I found Taptasic which connects readers with artists to showcase the best webcomics. 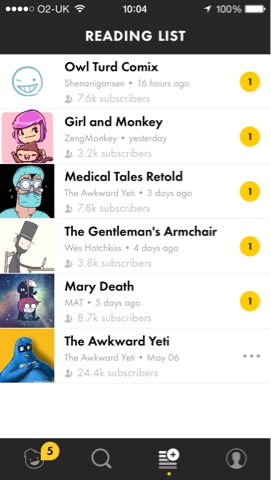 Discover new comics and artists, or publish your work and reach a larger audience. They have an app for Android and Apple Ios. This app lets you bookmark and subscribe to comics and also pings you when there is a new comic. But one of best aspects of the app is you can donate and help these web artist keep making content. So if you like comics check it out
Posted by Unknown at 10:08