Look daddy I fixed it 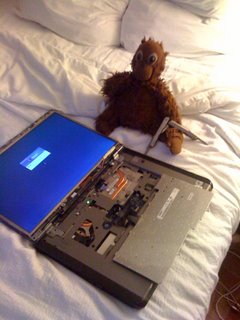 Well I had a little issue I dropped my laptop on the plane and for the
last two days it's been intermittant. The back light would turn off
after the screen was moved. But always came back after reboot. So back
in the hotel room with a leatherman, I decided to see what the issue
was as I know I have demos of ContentAgent over the next few days and
didn't want it turning off in front of customers. So dismantling the
laptop was not an issue and the problem could be seen a crushed single
cable for the backlight so a quick splice and the cable was as good as
new. The back panel was changed by an engineer when the panel was
broken at new year the cable must have been moved by the jolt. We'll
at least we have working laptop for tomorrow.
Posted by Unknown at 00:25