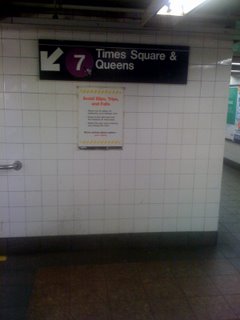 Well just got back from Las Vegas and got over the jet lag and it's time to hit New York. I travelled yesterday Saturday to make sure I included a saturday night in the trip and thanks to the United upgrade it was a pleasant trip to Washington DC and the a little hop on Mesa airlines to New York and got to the hotel around midnight. Seeing the people outside bar made me want to go and soak it up but I thought it would be better to get some good rest. Today Sunday is a day off so I'm going to head to Flushing Meadows park to see the site of the New York Trades Fair as featured in such games as Grand Theft Auto IV. I've seen the park before mainly during taxi journeies to and from JFK. So it will be good to finally go and see it and cross it off the list. Expect some photos later today.